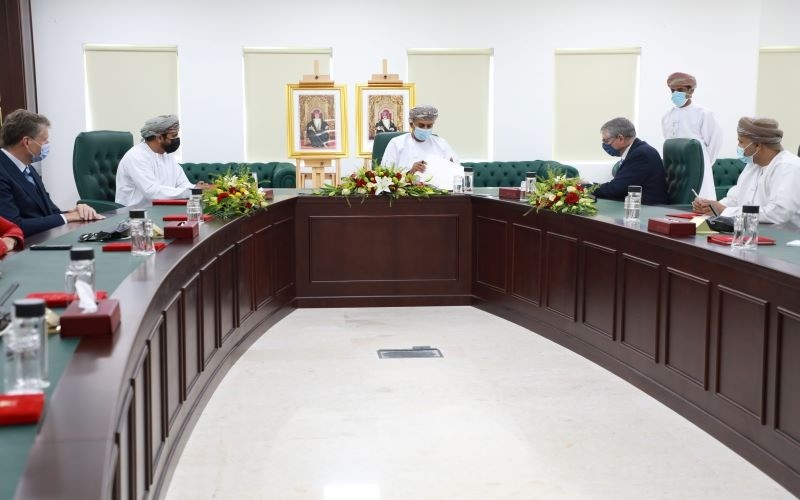 The Public Authority for Special Economic Zones and Free Zones (OPAZ) signed today a land reservation agreement for the green hydrogen project of Hyport Duqm Company, a joint project of alternative energy between OQ and the Belgian DEME Concessions.

According to the agreement, Hyport Duqm will now continue to move forward with the early engineering works and site data collection to establish a Green Hydrogen and Ammonia project in the Special Economic Zone at Duqm (SEZAD).

The agreement was signed by HE Dr. Ali Masoud Al Sunaidy, Chairman of the Public Authority for Special Economic Zones and Free Zones (OPAZ) and on behalf of Hyport Duqm by Dr. Salim Al Huthaili, OQ Alternative Energy CEO and Chairman of Hyport Duqm Company and Alain Bernard, Chairman and Managing Director of DEME Concessions.

The project will be established in part of the land already allocated for the renewable energy projects, in an area of 150 square kilometres and is located in the southern part of the Special Economic Zone at Duqm. Thus, ideally located along the windy and sunny Omani coast and Arabian Sea. This strategic land will accommodate both an onshore wind and solar PV farm with a combined capacity of 1.3 GW, which will be developed in subsequent expandable project phases.

Hyport Duqm is currently completing the installation and commissioning of 4 meteorological wind masts and 2 meteorological solar stations within the site in order to confirm Duqm’s excellent solar and wind conditions which are available throughout the year and which form the basis of a successful green hydrogen to green ammonia project.

The Hyport Duqm project fits well in the Sultanate’s strategy of developing the Al Wusta Governorate, while also contributing in achieving the renewable energy and other targets of the Oman Vision 2040.

Commenting on the land reservation agreement, HE Eng. Ahmed bin Hassan Al Dheeb, Deputy Chairman of the Public Authority for Special Economic Zones and Free Zones, pointed out: “OPAZ welcomes this project in the Special Economic Zones at Duqm. It aspires to be a pioneering project that will introduce green hydrogen and green Ammonia to the country, which will lead the diversification beyond hydrocarbons efforts and contributing to Vision 2040”.

Salim Al Huthaili, CEO Alternative Energy at OQ commented: “The land reservation agreement is yet another milestone in the development of this important project. The Special Economic Zone at Duqm will be a global Green Hydrogen hub combining power, manufacturing and logistics activities while focusing on effort of decarbonisation and electrification.”

“The excellent renewable resources and the existing infrastructures along with the upcoming national grid connection makes the Duqm zone an attractive and competitive destination for renewable projects. Oman continues to be a global leader in delivering clean energy projects to accelerate the energy transition effort. OQ and our shareholders The Oman Investment Authority continue to support this project and our strategy to grow this important sector.”, he added.

HE Dr. Ali bin Masoud Al Sunaidy, Chairman of the Public Authority for Special Economic Zones and Free Zones (OPAZ), had discussed with HE Tinne Van der Straeten, Minister of Energy of Belgium, in a meeting yesterday,  the localisation of clean hydrogen and ammonia industry in the Special Economic Zone at Duqm (SEZAD).

The meeting also highlighted ways to ensure the entry of clean hydrogen and green ammonia products that will be produced in Duqm, by the Omani-Belgian Hyport joint project, to European Union countries through the Belgian market.