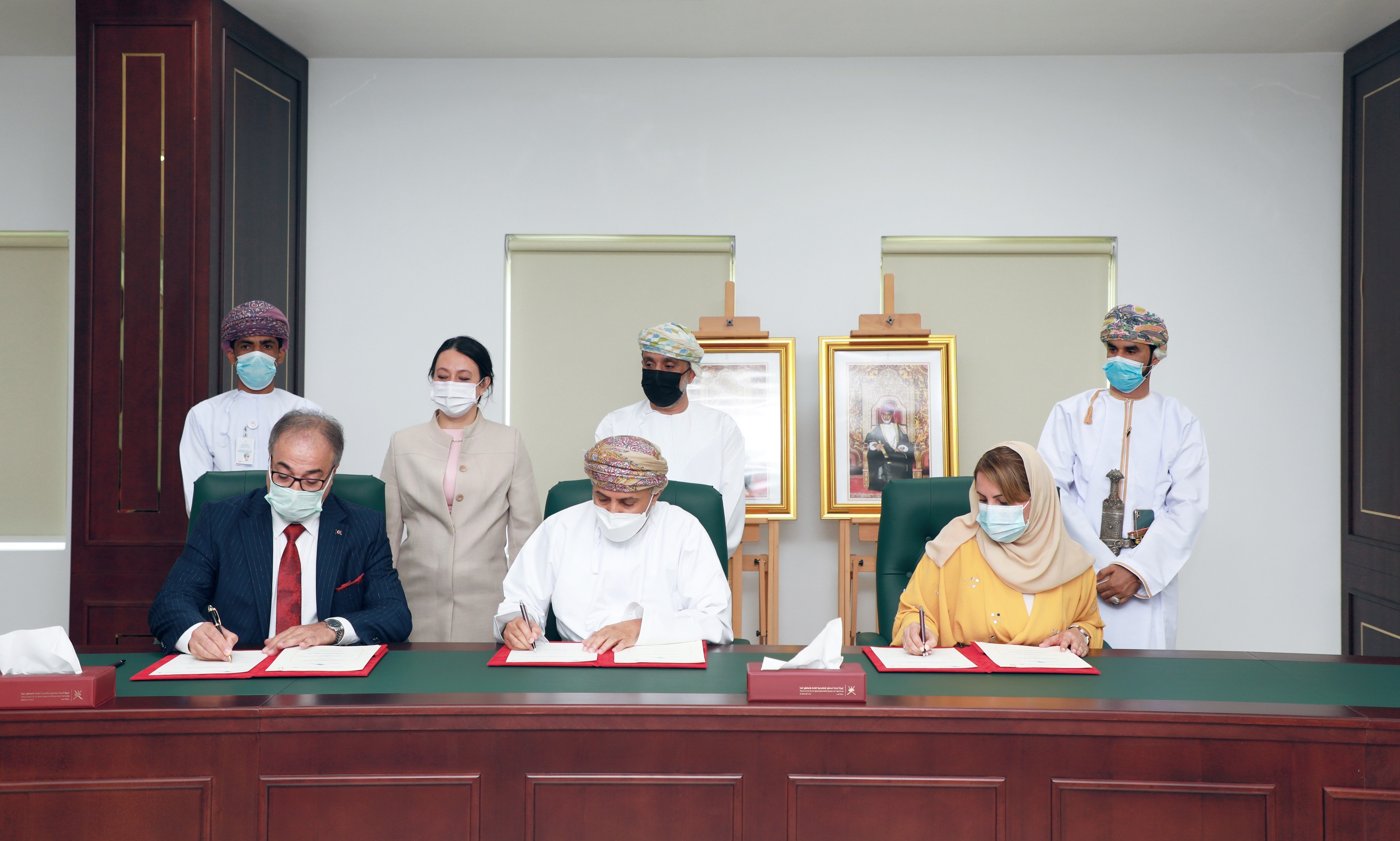 Asila Al Samsamiyah: The Ministry is determined to continue achieving its vision and mission, reflecting the objectives of Oman Vision 2040.

Ahmed Al Dheeb: We welcome Turkish investors to invest in various sectors in SEZAD and other zones related to OPAZ.

The Public Authority for Special Economic Zones and Free Zones (OPAZ) and the Ministry of Commerce, Industry and Investment Promotion signed today a cooperation programme with a trade delegation from the Turkish Gebze Organized Industrial Zone (GOSB) to attract Turkish investments to the Sultanate through the Special Economic Zone at Duqm (SEZAD).

The Turkish delegation visit to the Sultanate is organised by the Ministry of Commerce, Industry and Investment Promotion, represented by the investment promotion sector, in cooperation with OPAZ. The visit aims to discuss ways of trade and investment cooperation between the two countries and to meet with officials from a number of concerned authorities.

Signing the Programme reflects OPAZ efforts, in cooperation with the Ministry, to attract various investments to the Special Economic Zone at Duqm. “The Turkish delegation will explore the potential opportunities in Duqm to attract the Turkish companies. OPAZ is fully prepared to provide all facilities to these companies, which could easily access the regional and African markets through the Port of Duqm. As well, there are lands designated for gas-dependent projects as the gas pipeline project to Duqm is already completed and Duqm Refinery Project is on the way to complete too”, stressed HE Deputy Chairman of OPAZ.

His Excellency also affirmed that OPAZ welcomes Turkish investors in various sectors to make the most of the resources available in SEZAD and any other zones related to OPAZ.

On the other hand, HE Asila bint Salim Al Samsamiyah pointed out: “In light of the interest in developing trade relations between the Sultanate and the Republic of Turkey, different ways of strengthening trade cooperation between the two countries in various spheres were discussed in the meeting. Likewise, the delegation expressed high interest to form real partnerships in the targeted sectors, so the delegation will visit a number of concerned bodies during their stay in the Sultanate”.

Al Samsamiyah explained that the Ministry is determined to continue achieving its vision and mission, reflecting the objectives of Oman Vision 2040. This confirms the Ministry’s ongoing endeavor to efficiently market the national economy’s components. “The major objective of the investments is to develop Omani exports and stimulate attracting investments from free zones in various sectors, thanks to the complementary efforts and cooperation of the Omani Embassy in Turkey and other concerned authorities.”, She stated.

According to the Cooperation Programme, the Public Authority for Special Economic Zones and Free Zones will allocate a land in the Medium Industries Zone at SEZAD, so that the Turkish Gebze Organized Industrial Zone, as an investment developer, will promote the zone to companies operating in its industrial zone.

During the meeting, held at OPAZ, the bilateral relations between the two countries were reviewed and the investment environment and opportunities and incentives offered by OPAZ to investors were presented as well. Moreover, the delegation was also briefed on the most promising sectors that the Sultanate focuses on, infrastructure projects and economic projects that are relied upon during the coming era to attract foreign capitals.

The Gebze Organized Industrial Zone (GOSB) is located in the centre of the Marmara District, with an estimated area of ​​5,160,000 sqm of land, constituting two-thirds of Turkey's market. There are about 43 foreign companies and 163 companies in 188 industrial units in the Zone, with total exports estimated at about $11 billion from the Zone in 2020.

The production industries in the Zone include electronics, food, motors, rubber, plastics, chemicals and others. The Gebze Organized Industrial Zone is distinguished from others by the high-quality services it provides to the companies within the Zone. It is the only organised industrial zone in Turkey that provides a call, service and data centre, in addition to having a technology centre.

It worth noting that the joint efforts come in line with the implementation of the programme designed to attract private investments to the Sultanate and support Omani exports in foreign markets. This Programme was introduced by the directives of His Majesty Sultan Haitham bin Tarik, and supervised by the Ministry of Commerce, Industry and Investment Promotion, in cooperation with the Implementation Support and Follow-up Unit of “Oman Vision 2040" and the Ministry of Economy. The Programme is marked one of the accelerators of the first phase of the executive plan of "Oman Vision 2040" related to the pillar of economy and development, in addition to the Financial Sustainability Programme, which stands as one of the catalysts within the system of supporting the national economy.