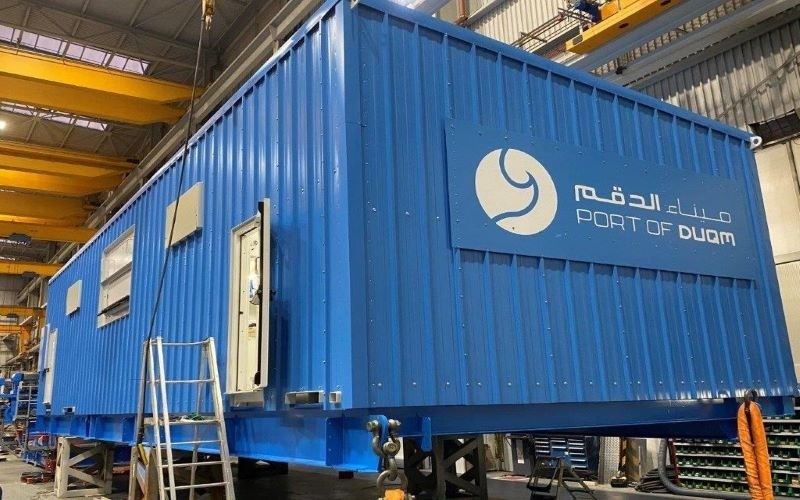 The Public Authority for Special Economic Zones and Free Zones (OPAZ) announced completing 60 % of the supply and installation project of containers cranes and bridge cranes for the commercial berth at the Port of Duqm which are equipped to handle the world’s largest container ship.

This project comes as part of the second package of the commercial berth at the Port of Duqm. OPAZ awarded the project to design, manufacture, supply, install, test, and operate containers cranes, and bridge cranes to the Irish LIEBHERR company on the 27th of April 2021. The project includes supplying 4 Ship To Shore containers (STS) and other 12 Rubber-Tyred Gantry (TRG) cranes with a lifting capacity of up to 41 tonnes.

The selection of these cranes came for their high, smart, and fast capabilities in container handling, as they were equipped with (5G) technologies in addition to a fiber-optic system to transport data to the crane operator for remote control. In addition to providing them with automatic driving systems, a yard monitoring system, and an automatic landing system, with a reach capacity of 71 meters and a rear reach of 18 meters, enabling it to handle the world’s largest container ships.

The project to supply containers cranes includes allocating 10% of the business value to Small and Medium-sized Enterprises (SMEs), which will be implemented during the preparation and installation period. The project also includes a training program for 4 young Omanis in several fields in the basics of mechanical engineering and structures in the factories of the manufacturer and another training in the installation period. OPAZ has agreed with the Port of Duqm that the cranes will be operated by male and female Omani youth using a 5G technologies operation system that enables remote control from the control rooms of the Port.

It is worth noting that the Port of Duqm is operating through temporary cranes. Duqm Port is one of the most important drivers of the Special Economic Zone at Duqm (SEZAD) and one of the strategic projects developed by the Sultanate of Oman to support the national economy and revitalize the economic movement. The size of the Port of Duqm and the capabilities available and the developed infrastructure enabled the Port to attract investments to the Zone, especially the industries sector.  The total length of the breakwaters is about 8.7 km, the depth of the Port basin is 18 meters and the entry channel is 19 meters, which qualifies it to receive and handle giant container ships. The Port consists of 3 main berths, the commercial berth, the government berth, and the liquid and bulk material berth (oil berth). The Port is currently operating with temporary cranes, and the length of the commercial berth is 2.2 km and consists of five terminals, including a multi-purpose terminal, RORO terminal, a container terminal, a marine terminal, a bulk and dry material terminal. The Port spreads over 187.9 km, 2,000 hectares of which were allocated for industrial zones, and 1,000 hectares were allocated for the Port's logistics zones.