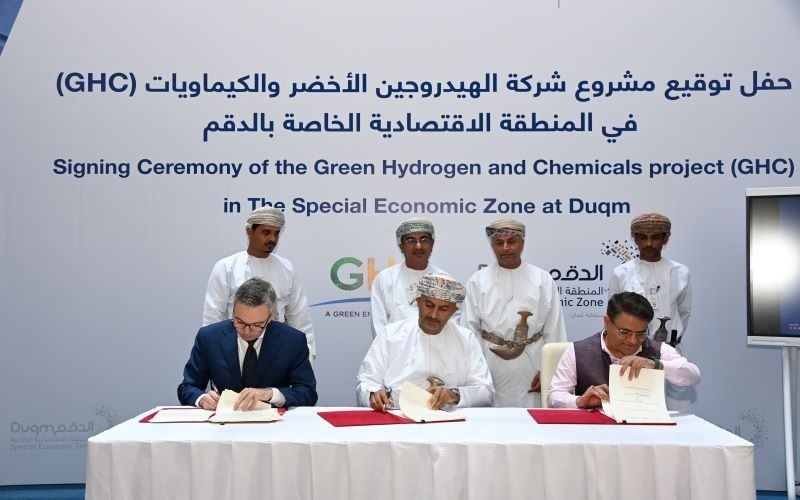 The Public Authority for Special Economic Zones and Free Zones (OPAZ) signed today (22 June, 2022) land usufruct agreement with Green Hydrogen and Chemicals Company (GHC), a joint venture between the UK entity of ACME Company and Norway-based Scatec ASA, to develop phase one of green hydrogen and ammonia project in the Special Economic Zone at Duqm (SEZAD).

The agreement was signed by HE Dr. Ali bin Masoud Al Sunaidy, Chairman of the Public Authority for Special Economic Zones and Free Zones and Manoj Upadhyay, Chairman & Founder, ACME Group. As per the agreement, the Green Hydrogen and Chemicals Company (GHC) will begin developing the first phase of the project over 12 km2 of land to produce 100,000 metric tonnes of green ammonia per annum in the Special Economic Zone at Duqm. Once fully developed, the project is expected to produce up to 1.2 million tonnes of green ammonia annually.

Speaking on this occasion, Eng. Yahya bin Khamis Al Zadjali, In-Charge of Managing the Operations of the Special Economic Zone at Duqm, pointed out, “The Special Economic Zone at Duqm will play a major role in the future of energy transition in Oman. Today’s project will allow Duqm to become a hub for green hydrogen projects. Attracting such outstanding projects and investments to Duqm will thrive the promising clean energy sector in the Sultanate of Oman”.

He added, “Signing this agreement will serve as a testament for the Sultanate of Oman being an ideal hub for green hydrogen and green ammonia projects, considering the high solar irradiation and wind resources all year around. Accordingly, it will attract further investments and projects to the Sultanate of Oman and Duqm, in particular”.

Rajat Seksaria, CEO, ACME Group spoke in this occasion saying “The signing of the usufruct agreement is an important milestone in setting up this green hydrogen and green ammonia project. We will start the construction activities soon and build one of the most advanced technologies and create a state-of-the-art facility. This project helps opening a new chapter of business cooperation between our countries – India, the UK and Oman. We extend our gratitude to the Sultanate of Oman for helping us contribute to the journey of innovation and transition to clean energy sources. We are also delighted to have Scatec as our JV partner in this exciting venture.”

Terje Pilskog CEO of Scatec also commented “The signing of this land lease agreement is another key step in our green ammonia project, and we would like to thank the Government of Oman and our joint venture partner Acme. Green hydrogen and green ammonia are vital if we are to get on track to limit global warming to only 1.5 degrees Celsius. We want to produce a strong supply of green hydrogen to help create energy security and a pathway to net zero”.

Gursharan Jassal, Country Head- Oman, Green Hydrogen & Chemicals stated that “The signing of the usufruct agreement is a key milestone in our ongoing efforts to develop the green hydrogen and green ammonia project in Duqm. ACME and Scatec, as Joint Venture partners, are committed to work closely with OPAZ and the Ministry of Energy & Minerals in our endeavour to bring onstream this green ammonia project in a time-bound manner.  This project will further contribute to the Sultanate of Oman’s green energy vision and position Oman as the global export hub for green fuel”.

It is worth noting that this agreement proceeded signing the land reservation agreement that was signed between OPAZ and ACME Group in August 2021, which included conducting field studies of the project as well as installing weather monitoring station to measure the solar and wind potential in Duqm.

The project has signed an MOU with Marafiq for cooperation in supplying electricity during non-solar hours for plant utilities. Marafiq is Oman’s first centralised utilities provider with the exclusive right to provide utilities in the special economic zone of Duqm. The MOU signed will translate soon to a power purchase agreement and will allow Marafiq to supply utilities to the project.

ACME Group (www.acme.in), set up in 2003, is a pioneer in cleantech sectors such as solar, green hydrogen & ammonia and sustainable green protein development. The Company is one of the leading Solar Power Developers in India with project under development & operational portfolio of 8.5 GW. The company is presently constructing 1.8 GW generation capacity which will be one of the largest single location solar generation facilities in the world. In the field of Green Hydrogen & Ammonia besides under development project in Oman, the Company has already set up the world’s first single location integrated solar power to green ammonia facility at Bikaner Rajasthan. The company employs more than 1000 people in India and abroad.

Scatec is a leading renewable power producer, delivering affordable and clean energy worldwide. As a long- term player, Scatec develops, builds, owns and operates solar, wind and hydro power plants and storage solutions. Scatec has more than 3.5 GW in operation and under construction on four continents and more than 600 employees. The company is targeting 15 GW capacity in operation or under construction by the end of 2025. Scatec is headquartered in Oslo, Norway and listed on the Oslo Stock Exchange under the ticker symbol ‘SCATC’.